How much does the Erlang's great but unexplored hot code reloading complicate the deployment as we know it?

I repeatedly hear worries of (mostly Rails) web developers about migrating to Phoenix due to the completely new deployment patterns. Although they're usually aware of many possible benefits of true zero-downtime deployments offered by OTP releases, they don't necessarily want to invest significant time and effort into mastering them right away. Well, let me explain why exactly you shouldn't be worried. And when or why you actually should.

Update: As pointed out by Paul Schoenfelder, the exrm's author, the tool should be considered as deprecated and made obsolete by his next development, distillery. I've updated the article to list the tool alongside exrm and edeliver, as well as with a link to article about it.

One of things that maybe isn't emphasized enough in Phoenix books and tutorials is that you're perfectly capable of running your deployments the old way, that is by building the app directly on the webserver and then restarting it. The Phoenix HTTP server (cowboy) can work stand-alone or behind a proxy like Nginx, which among others allows to serve many apps with one VPS. 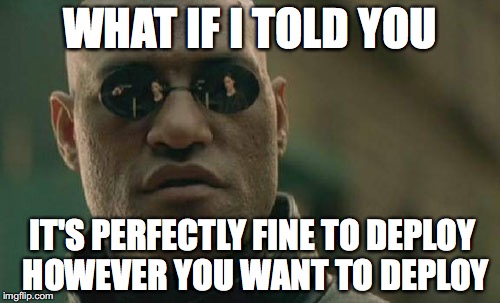 And what if I told you that it's not just as easy as before, but it improves upon Rails in how such deployment actually works? Here's how:

Now, let's overview some basic options for deploying this way.

Yes, you'll deploy your app to Heroku in no time and the process will have the same basic benefits and limitations as the one for Rails. Benefits include ultra-fast provisioning, the infrastructure with wide array of attachable services and the support. Main limitation (besides rather steep pricing) is the inability to have zero-downtime deployments (without the server restart). But that's not what we're after anyway when considering legacy deployment.

How? It involves adding proper buildpacks (Elixir + Phoenix static) and aligning the production config with Heroku (eg. to use env vars). It's all described in the official Heroku deployment guide.

If you'd rather go with your own server, but you don't want to go for OTP releases yet and/or you want to host multiple projects on it, I recommend to provision and deploy using my very own cloudless-box cookbook for Chef. It covers setting up webserver essentials and allows to host single or multiple web apps written with Phoenix, Rails, Node, Meteor or Middleman.

This option is good for those developers who want to be in control of their web apps, feel comfortable with the CentOS shell (which always comes handy regardless of automation tools like Chef), don't want to pay for Heroku, but also don't want to install everything from scratch on their shiny new VPS. On the other hand, although I've put a lot of effort into making Cloudless Box's guides approachable for everyone, Heroku will still be easier to start with.

How? The official website covers everything, starting with the installation procedure and the configuration options, ending with usage tips and the up-to-date version history.

Side note: This very website is managed and deployed with Cloudless Box, too.

I never liked Capistrano. That's one of the reasons why I've turned to Chef for deployment. But I know many developers are used to it. You'll most certainly be able to deploy the Phoenix app with Capistrano, Mina or whatever tool you prefer. That's because there's nothing really special about such deployment. Here's what it roughly consists of:

Steps 1 and 7 are common to all legacy deployments. Step 2 is an equivalent of bundle install in Rails. Steps 4-6 are equivalents of rake assets:precompile in Rails. Only step 3 is something new from the Rails perspective. Other than that, it's all home sweet home.

Take a look at capistrano-phoenix or Deploying Phoenix with Mina in order to deploy your Phoenix app using either of these tools.

OK, you can go with legacy restart policy but in the end, you do want to aim for the OTP releases. After all, it's one of those Erlang/Elixir/Phoenix features that's just wonderfully tailored for web apps. In particular, to those projects that really need high availability or long, uninterrupted websocket sessions. This makes Phoenix a perfect framework for chats or games, among others.

This form of deployment certainly becomes easier and easier to apply these days, partially thanks to the development of excellent tools like exrm, distillery and edeliver. For those of you who want to understand it all better, I can't recommend enough the following Fast Continuous Deployment of an Elixir Gameserver video, a showcase of edeliver by its authors:

Here's a bunch of other resources about Phoenix deployment in practice:

To summarize the above video, OTP releases introduce a flow with many steps that are specific to this ecosystem. The flow roughly consists of the following unusual steps:

That's why you won't get away with just slight adjustment in existing toolchain. You'll need to learn and use new tools, like aforementioned exrm or edeliver as they take into account all those particular needs of the OTP release cycle. In case of edeliver, you'll also have the benefit of architecture with a separate build server covered, so it's ready to be applied in larger projects that can't afford to put the release building burden on the production server.

One of the concerns that I still have is: what exactly should the Phoenix developer be aware of release-wise when implementing actual features and writing the MVC code? For instance:

These are the questions that are still unanswered in my head, but I hope to change that soon, either by my own experience and testing or by reading and learning from others. Once I do, I'll surely update this section. This is one of those questions that I need to answer in order to really understand the risks of picking Phoenix for the job.

It's easy to get scared by the new release system when first arriving in the Elixir universe. Trust me, I've been there. But as I've shown you, you can quick-start with what you already know and upgrade your methodology and infrastructure later.

Deployment of OTP releases, as amazing as it is, may be hard to approach at first so it's great news that the legacy strategies still apply, as described above.

Here's how I've made the first step into introducing Elixir and Phoenix to our Rails development team at VIsuality. Read more »

Mix is an equivalent of Rake for running project tasks. But it's much more than what you came to expect from Rake. Read more »

The best of Rails in Phoenix (part 1)

There are many parts of Phoenix that will make you, the long-time Rails developer, smile and feel right at home. Read more »